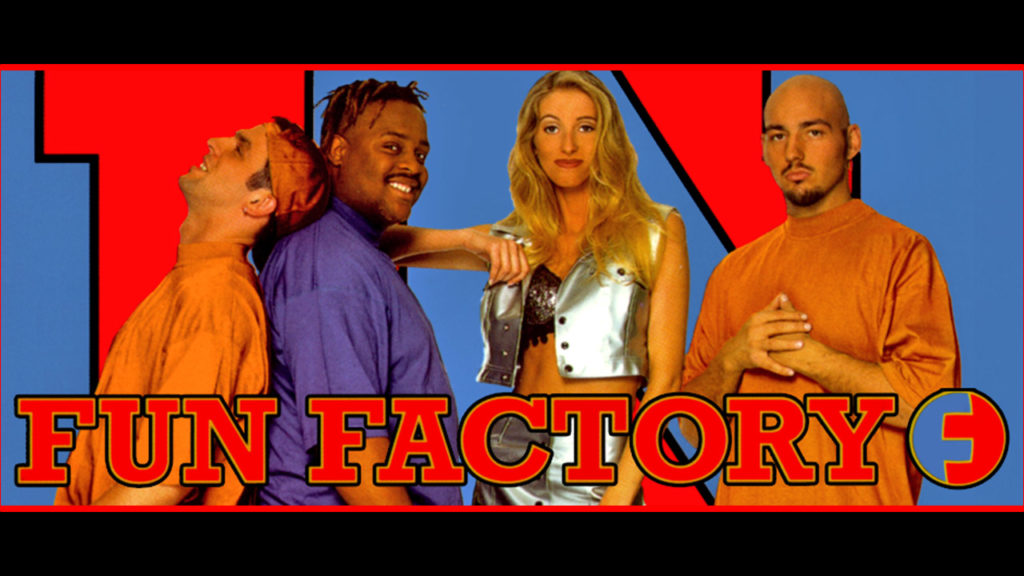 The original members were: Toni Cottura, Rodney Hardison (Rod D), Stephan Browarczyk (Steve), Marie-Anett Mey as stage “actor” and  Balca Tözün as female vocalist in the studio. The group reached massive success throughout the 90’s.
Their very first singles were Fun Factory’s Theme (1990) and Groove Me (1993).

Fun Factory released their debut album Nonstop in 1994. With next single Close to You became their first chart success peaking #1 at the Canadian Dance chart. Follow up singles were Take Your Chance and Pain being chart hits as well, peaking #18 and #24 in the German Single chart respectively.

In 1995, the band released their singles I Wanna B With U, Celebration and the Manfred Mann cover version retitled and shortened Do Wah Diddy, all chart hits, peaking #11, #12 and #6 in the German Single chart.

Then Fun Factory released their second studio album Fun-Tastic. By this time they began to become more popular throughout Europe and even saw some of their songs to chart in the USA and Canada. The follow up single release was Don’t Go Away becoming their yet last moderate chart success. It was also the last single to be promoted by the band as a quartet, when Cottura left the band.

As a trio, the group released two more further singles, the ballad I Love You and Oh Yeah Yeah (I Like It).

In 1997, a Fun Factory Greatest Hits album has been released to end up the chapter.

In 1998, a Fun Factory spin-off came around with an all-new line-up, first comprising singer Lian Ross as female vocalist in the studio, Anett Möller as stage “actor” and rappers:  T-Roc/Tiger One (Terrance Lamont Croom) Alfonso Losa-Eser and Alexander Walser from Liechtenstein.

In 2002, New Fun Factory’s studio album “ABC of Music” came up with the moderate success and the group was soon dissolved.